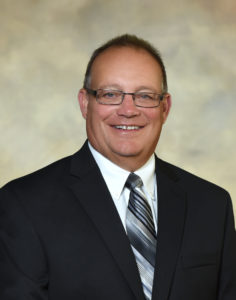 Mayor Jury was sworn in on May 1st, 2017 to become the 9th Mayor of the City of Loves Park.

Greg has served Loves Park since 1999, as an Alderman for the 1st Ward. Greg is a Harlem High School graduate and a lifelong resident of Loves Park. After graduation from High School, Greg earned his Bachelor of Science Degree from Loras College in Dubuque, Iowa.

In his early part of his work experience, Greg worked for Rockford Truck Sales, eventually rising to General Manager. He then chose a career change into the restaurant business by purchasing the Top Hat Restaurant. In 2001, Greg sold the restaurant and went to work for Rock River Environmental Services where he was the Municipal Sales Manager from 2012 to 2017 when he became Mayor.

Greg’s entry into public service as an Alderman was driven by both his desire to serve his community, as well as, seeing a need to have individuals in these positions who can advocate, and who can analyze the budgets and provide real oversight for the citizens. Greg has been a taxpayer advocate, working to ensure that Loves Park never has a property tax.

Greg always worked with other members of the city council, as well as, the city administration to make sure that Loves Park residents always received quality service. Greg has always been in the forefront in helping to develop relationships with other communities and government entities that will serve the entire region.

Greg has served as Past President for both the Loves Park Lions Club and Parks Chamber of Commerce. He has also served for the last 27 years as a Board Member of the SwedishAmerican Health System.

On a personal note, Greg has been married to his wife Kelly for over 38 years and they have two grown children and three grandchildren. Greg and Kelly are the founders of the Ryan Jury Memorial Golf Outing which raises money for the children of SwedishAmerican Hospital and is named after their son who died of cancer at 23 months in 1986. Over the last 31 years, they have raised over $1.2 million to help the children.